There’s a reason why Vox amps are considered to be the epitome of the classic British sound. Vox amplifiers have always been known for delivering rich, full tones and clean overdrives, which has made them the go-to option for getting a classic tone.

From the legendary Brian May to The Beatles, Vox amps have been used by the greatest guitarists of all time. So, the Vox AC4HW1 has a lot of weight on its shoulder. Fortunately for us, the Vox AC4HW1 delivers on its promise, and then some.

Who Is This Guitar Amp For?

The great news about the Vox AC4HW1 is that it uses an almost identical circuit that’s been around since the 50s in the AC2 and AC6. While this new iteration is by no means a reissue of the legendary amp, it can be seen as a close cousin to the slightly differently styled early Vox amps. That’s because this newer version has been built to be more in tune with modern requirements, which is understandable.

The new model Vox amp takes inspiration from the EL84-powered top boost circuit that was much loved by the bands in the 60s. The best part about using a Vox amp is that it relies on an easy-to-use layout that doesn’t require a user manual to operate if you are familiar around guitar amps.

The straightforward controls of the AC4HW1 mean that it can be used by anyone from the beginner to the lead guitarist of a band, and even at a church. The incredible versatility of this Vox amp along with its ability to deliver clean sounds is what makes the Vox amp a much-loved favorite.

You are really going to appreciate the engineering finesse of the folks at Vox once you have plugged in your Les Paul or Strat and had a swing with real grown-up tunes using the Vox AC4HW1. The 12” speaker delivers an incredible sound that can fill up a room effortlessly. The powerful speakers and the turret-board makes a great combination in the Vox AC4HW1 by lending it a wider and more open output.

If you plan on jamming with the Cool mode, then the tweaked bass and treble are going to introduce to you shimmer and roundness that will make you keep on going. In other words, you are going to feel very much at home while playing with the Vox AC4HW1 by your side.

What’s Included With The Vox AC4HW1? 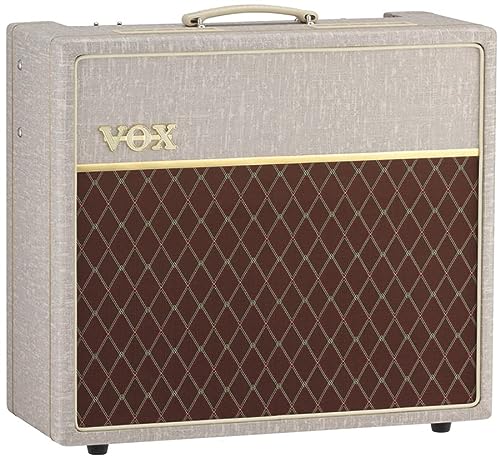 The following is a breakdown of the features of the Vox AC4HW1 amp:

Whenever guitar players think Vox, they think of top-notch sound quality and the “Top Boost.” The new Vox AC4HW1 offers you with the same level of Top Boost nicely packaged in a compact frame.

This all-tube combo amp will give you rich, classic tones through a powerful 12” Celestion G12M Greenback speaker. The AC4HW1 also features volume, bass, treble, a master volume, and a hot/cool switch that allows you to customize your sound in that classic Vox style.

With the Vox AC4HW1, not only will you enjoy the classic cosmetic build that takes you back in time to the 60s, but you also get to grab those distinctive tones that only Vox amps can deliver.

Overview of the Features Of The AC4HW1

Finally, with the Vox AC4HW1, guitar players get that much sought-after Top Boost tone in a hand-wired, all-tube combination from Vox. If you’ve been searching for a valve guitar amp to crank up at home or during a gig, then the Vox AC4HW1 is a great choice, especially for those who love the distinct sound of Vox amps and don’t mind getting an amp with incredible aesthetics as well.

All in all, the Vox AC4HW1 is the complete package, and the fact that is it hand wired gives you that extra growl.

This amp sounds amazing and is incredibly responsive. The amp also takes pedals well, which is always a good thing. If you constantly use the reverb, delay or tremolo, then you are definitely not going to be disappointed with this compact, 4-watt amp.

What sets apart the AC4HW1 from other Vox amps is its larger cabinet, the birch ply construction, and of course the Celestion Greenback and Turret-board wiring. This Vox amp shines on Cool setting, while the power section overdrive gets a creamy compression and sustain many guitarists look for. Even with moderate output pickups, the tone stays clean long enough for you to use it for gigging at small venues.

One small hiccup with the AC4HW1 is that it doesn’t do jazz tones justice. This is partly due to the fact that there’s just not enough headroom with only 4 watts driving the greenback. If you are looking to do jazz then you are going to require an amp with more wattage, EX and preferably two channels along with a more articulate speaker, in which case the Vox AC15HW1 is going to be your best bet.

But, if you’re just looking to recreate Led Zep’s famous riffs at home or play in the church worship band then the AC4HW1 does just fine. This is partly because the AC4HW1 sizzles when playing classic rock and blues.

All you have to do is dime the bass and turn the treble to 6 and you’re good to go. If you’re feeling to recreate classic hits by the Eagles, and want that Joe Walsh sound then try Hot Mode, giving a lift in volume and lower mids, with the master volume cranked to 9 and wait for the neighbors to come and join the party.

Conclusion Is The Vox AC4HW1 Right For You?

What makes the Vox AC4HW1 amp special is that it has it all. From blues and classic rock to modern pop music, you can experiment with some great tones that sound effortless and uncomplicated. This is by far, one of the best tube amps you will get your hands on at this price point.

We hope our Vox AC4HW1 review has been helpful to you.