If you’re looking for the best budget-powered mixer, then look no further than Mackie PPM608. This is a great option if you want to save on cost without sacrificing quality or features. It’s made specifically for small churches and venues with up to 600-watts of power handling capabilities. We’ll go over some of its features below in our review, so keep reading!

Finding a mixer that is powerful, portable, and affordable can be very challenging.

Mackie’s PPM608 has all the power you need to fill your events with 500W of Class-D Fast Recovery amplification (plus an additional 500W for monitors). This ultra-lightweight powered mixer delivers professional performance at an unbeatable value. Plus it’s built like a tank! So whether you’re headed to your next gig or setting up your home studio, the Mackie PPM608 will deliver every time.

The Mackie Mixer PPM608 gives you everything you need in one compact package – great sound quality and plenty of features! You’ll love how easy it is to use this 8 channel powered mixer with its onboard RMFX+ processor featuring 24 “Gig Ready” reverbs, choruses, and tape delay effects. It also includes 2 stereo inputs with dual RCA and dual 1/4 inch line inputs for connecting your iPod, CD player, computer, and more. 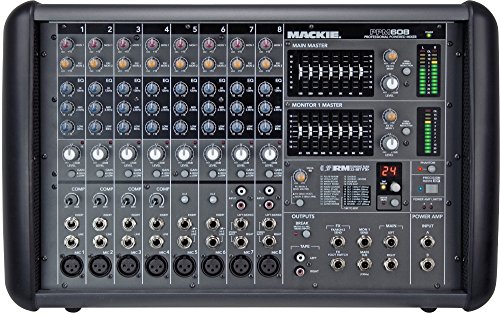 The Mackie PPM608 is an eight-channel 1000-watt powered mixer that is lightweight and portable, but there is nothing lightweight about its power. It consists of two 500-watt Class D fast recovery power amps that allow the mixer to be both cool running and very efficient.

One of the biggest advantages of choosing this mixer is its ability to accommodate performances and tasks of all sizes, even if it’s a live performance in a large concert hall. Whether you’re a musician, sound engineer, or anyone else involved in using a mixer, you’ll appreciate all of the many features it has that make it a notch above the rest.

One of the things that can’t be overlooked is how well-made it is. It has a solid steel chassis that allows the mixer to take a lot of abuse and keep on going. It also has recessed control buttons that protect it should it fall down in the back of the van or get knocked over at a concert.

While you naturally want a very useful and accommodating power mixer, you also want one that you won’t have to handle with kid gloves, and the Mackie PPM608 mixer is made with all of the components necessary to be able to enjoy it and get the most out of it for many years to come.

This is also a very user-friendly mixer that people can use whether they’re sound experts or just getting started in the business. It is portable and easy to transport from one location to another, and you even get a total of 24 usable reverbs, choruses, and tape delays for all of your live performances.

These “gig-ready” effects are usable and practical; in other words, this mixer doesn’t waste your time with effects that you’ll never use or have so many effects that operating the mixer is cumbersome or awkward. It is both fast and simple to learn, and it’s mostly due to the fact that these 24 effects are so solid and well-organized.

Top Benefits of the Mackie PPM608

Just because the Mackie PPM608 mixer is easy to use and compact doesn’t mean that it doesn’t have a lot of high-tech features. The mixer does, in fact, offer tons of features that owners soon learn they cannot live without. It is multicolored and therefore looks good, but it also offers eight premium Mackie mic preamps with 48-volt phantom power and TRS inserts in channels 1 through 6.

The Single Inline Compression (SIC) is there to provide increased presence and an extra punch for both vocals and instruments. The mixer stays cool and doesn’t overheat thanks to the Class D amps, and at a little under 25 pounds, transporting it from one gig to another is always a breeze.

In addition to all of this, the PPM608 mixer has the following features:

What all this means in practical terms is this: the Mackie PPM608 mixer has high-quality components and features that will thrill musicians and engineers of all experience levels, and the price of only around $800 is just one of its many perks.

The PPM608 mixer also has an onboard 32-bit digital RMFX+ processor that ensures that all FX will be predictable and efficient, as well as a total of 12 segment LEDs for your main and monitor outputs. The metal handles mean you can carry it around with ease, and the separate monitor and FX auxiliary sends mean extra convenience and practicality for you.

You even get two built-in DI boxes for direct instrument connections, which can make any live performance sound that much better. When it comes to simplicity, user-friendliness, and high-tech features, you simply can’t be the Mackie PPM608 powered mixer.

Finally, let’s take a look at the size of the device. It weighs just 24.8 pounds and is 12.3” x 19.3” x 11.4” in size, which is crucial if you’re in a different location night after night. The last thing you need when you’re on the road a lot is a super-heavy, cumbersome, and difficult-to-maneuver mixer that you have to dread taking care of. The PPM608 is lightweight even though it is powerful and does a lot, so you don’t have to worry about it being difficult to take care of regardless of what you end up using it for.

Mackie PPM608 Review of the Pros and Cons

The Mackie PPM608 eight-channel powered mixer has a 4.4-star rating on Amazon out of a possible 5 stars. A full 82% of the reviewers rated this mixer either four or five stars, which says a lot about it. Below are some of the advantages and disadvantages of owning the mixer.

Q: Does the mixer have Bluetooth capability?

A: No, it does not. The only way to get Bluetooth capability is to buy a Bluetooth receiver and connect it with RCA cables.

Q: Does the mixer have a headphone output?

A: Unfortunately, it does not.

Q: How big is the mixer?

Q: How sturdy is this mixer?

A: The PPM608 mixer is very sturdy because it has a solid steel chassis, polycarbonate ABS end caps to protect the mixer itself, a rounded front with recessed control, and heavy-duty metal side handles, all of which help protect the device year after year.

Q: What does the PPM608 mixer come with?

A: The mixer comes with a user manual and a one-year warranty, so you can start using it right away.

The Mackie PPM608 powered mixer is perfect for musicians and sound engineers who want top-notch sound but who are also on a budget. While the mixer is lightweight and compact, there is nothing lightweight about its capability to produce great sound whether you’re in the studio or on the stage.

This is a well-built and very versatile mixer that has tons of features you’ll soon learn to love, and because it weighs under 25 pounds, it is very easy to transport it from one gig to another. This is definitely one purchase that you will not regret.

Thank you for reading our Mackie PPM608 review!

The 1604VLZ4 Review: A Comprehensive Mackie Mixing Console with a Long-Standing Tradition

Are Behringer Mixers Good? What You Need to Know